The Tyrrell 023 was designed by Harvey Postlethwaite and Mike Gascoyne for the Tyrrell team for use in the 1995 Formula One season. Driven by Ukyo Katayama and Mika Salo, the best finish achieved by the 023 was fifth (twice).

The 023 featured a new hydraulic-controlled front suspension system, known as "Hydrolink", which Tyrrell had been testing since February 1995. It used a 3-litre version of the Yamaha V10, which had been raced the previous year.

The team retained all its 1994 backers including Mild Seven, BP, Fondmetal, Calbee, Club Angle and Zent. This was partly helped by the fact that new team driver Mika Salo brought $3 million with him to the team. Ukyo Katayama, who had driven for the team since 1993, remained on the roster.

After an impressive 1994 showing with the simple but effective 022, 1995 was a huge disappointment for the team. The 023 chassis proved to be very mediocre and the team's innovative "Hydrolink" suspension was rendered ineffective due to its deficiencies. The Hydrolink suspension was eventually removed from the 023 at mid-season. 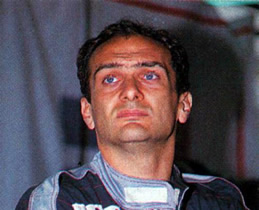